However, this is the scenario that Wikifrauds feels is correct. We state here, that at this stage, we can't prove this to be factual, and we are hopeful that our friends in the Spanish press and the local authorities might provide some facts to backup this picture.

Based on the information we have, Ali does have some money, lots of it. Most of it sucked out of unsuspecting people in Australia, New Zealand and the UK.
Using the estimated $40 million on deposit in Credit Suisse, other people's money, Ali gets a Euro 1.5 Million  Stand By Letter of Credit (SBLC) to use as the first payment in the purchase of the club. The SBLC is really just a complicated promissory note, just like an undated cheque in reality. The contract with the club is to then take out all the debt over a time schedule agreed upon. The SBLC sits in place while he honors the deal.and is there if needed to be called on in the event of a default by Ali. So in effect, he has actually paid no money whatsoever to this point, but now has control. The press herald the saviour, hero, billionaire tycoon, and the fans go crazy.

Now, a mere few weeks later, he wants to float the club to the public for 30 million. This public funding by ordinary Spanish investors, will enable him to maybe payout the local government loans to the club, as they so far have not received any cash at all. Indeed, it is alleged that a tax payment of a mere 2 million was due on January 31 and he has failed to pay this as of February 16.

The following is part of an interview with Francisco Pernia, President of Racing Santander:


Pernia has been among the first in Spain to find the prize he sought. Especially statements: "With the current owner of Manchester and I met four years ago in Qatar. Incidentally, the trip also was Fernando Sanz, who informed him of what was going to do there. It shows that our intention was not new. had to be proactive. In Racing we got into the hands of Credit Suisse to advise us. We found a number of stakeholders. Many were geeks. People who think you know everything and you all. With many ideas and little money . At the first meeting you go with questions. Especially because I expected people interested in Mexico, where much Spaniard exiled after the war. But suddenly appeared Ali."

So we now have a fraudster in charge of Racing Santander, who has not yet discharged his obligations to payout the Government's stake in the club nor the taxes now overdue. And it has cost him almost nothing to do it. The fees on the SBLC at around 2% would have cost only 30,000 Euros. Nice work. Ali is a true genius. Growth is his speciality. He could teach Bill Gates, Warren Buffet and Rupert Murdoch, how to make money. After all, WGA had an increase of 733% in net profit in 2009 over 2008 according to his own Annual Report, the same Annual Report that caused his auditors BDO to quit.(Wikifrauds has a copy of this extraodinary report. If anyone wants a copy, please let us know)

The really big questions are these:
The Spanish Press MUST ask these questions. They need to get to the Government and have them verify the position. They need to check with the Tax Authorities. And they need to get right in Ali's face and ask about the settlements promised to Australian and New Zealand businesses, most of whom have been waiting up to and sometimes over, twelve months! There are people over in Australia who have lost their homes and been forced into bankruptcy!

What does the future hold? It is quite conceivable that if Ali can't raise the capital he wants, and then cut the losses the club is making, or fail to capture the players he needs, then he will walk away. There will be an escape clause somewhere. And it will have cost him almost peanuts for the SBLC compared to the international press cover he has received, and which he uses to maintain credibility in the eyes of future borrowers. Bernie Madoff, . . . move over!

The true owner's of Racing Santander are the many companies in Australia (and two or three in NZ) who have given Ali over $40 Million in up-front fees and never got their loan agreements settled.

Pernia - impressed by Alis private jet. Grab the article link (below) and use the Google translater. Wikifrauds contacts in Spain tell us this guy is fawning all over Ali in an embarrasing way. http://www.as.com/futbol/articulo/otros-alis-compraran-clubes-final/20110218dasdaiftb_36/Tes
And now, after just two months or so, Ali has broken three promises to pay the players, and Pernia has borrowed a further two million Euros from another source to pay the club's debts - the debts that Ali was supposed to pay but either has not or will not. 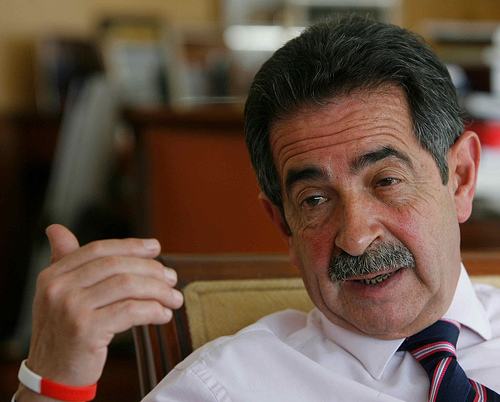 Revilla. A risky and cosy friendship with Ali could spell the end of his political career at the upcoming elections. No more late night TV appearances, no more strolling around the city's cafes with a big cigar.